…And All Other Mind-Altering Substances

STEP ONE: We admitted we were powerless over cocaine and all other mind-altering substances—that our lives had become unmanageable. TRADITION THREE: The only requirement for C.A. membership is a desire to stop using cocaine and all other mind-altering substances. Many people come to Cocaine Anonymous thinking one of two things: “I rarely (or never) even used cocaine.

This pamphlet contains a description of one method for taking the Twelve Steps of Cocaine Anonymous. To help us work the Twelve Steps, Cocaine Anonymous uses a text entitled Alcoholics Anonymous, commonly referred to as the “Big Book.” When studying this text, some of us find it useful to substitute the word “cocaine” for “alcohol” and the word “using” for “drinking,” although in the process, some of us discovered that we are alcoholics …

As a newcomer, you may have thought or said, “What’s this talk about God? I came here to stop using cocaine, not to join a new religion.” Don’t feel alone. Many of us were put off with the talk about God when we first came to meetings. It is easy enough to confuse the word spirituality with religion. As it relates to God, Cocaine Anonymous is a spiritual program, not a religious one.

The 12th Step of Cocaine Anonymous suggests that we “practice these principles in all our affairs.” Principles can be defined as fundamental truths, beliefs, values, or philosophies. Living in accordance with spiritual principles can be a lifelong challenge, which is where the “practice” part comes in. The following list is by no means all-encompassing, but these are twelve essential principles of the C.A. program of recovery:*

If you have ever questioned the meaning of anonymity, perhaps this pamphlet will help. One definition of “anonymous” is “nameless.” Anonymity is vital to the continued growth and existence of Cocaine Anonymous, and the Fellowship’s name contains an implicit promise of privacy. By treating who we see and what we hear at our meetings as confidential, C.A. remains a safe place to share our experience, strength and hope.

In addition to finding a spiritual way of life, recovery is about changing negative aspects of our personalities into positive ones. We came into the program with big egos but little or no self-esteem. We thought we were better than other people yet, at the same time, felt “less than.” We were people who took from others and abused friendships all of our lives. We had no concept of doing anything for anyone without the thought of some kind of reward.

C.A.’s 7th Tradition reads as follows: “Every C.A. group ought to be fully self-supporting, declining outside contributions. ”You’re probably like many of us were when we first came into Cocaine Anonymous—we put our money into the basket and then saw it collected by a person we thought must be the boss or president of C.A. At first this didn’t seem like a big deal, but eventually we wondered, “Where does that money go?”

C.A. is Also for the Gay, Lesbian, Bisexual or Transgender Addict

The first time I shared my story at a Cocaine Anonymous meeting, I had expected looks of disgust and fear, but instead I received warm hugs and appreciation. It’s a big change for someone who grew up being taunted and feeling rejected. People in the Fellowship value my individual experience, and many have thanked me for being honest about who I am.”

You’ve likely heard lots of talk at Cocaine Anonymous meetings about working the Twelve Steps of Recovery, recovery, finding a Power greater than ourselves, and getting a sponsor. If you’re like most newcomers, however, you’re probably not sure what all these terms mean. This is why it’s a good idea to get a sponsor. A sponsor can devote individual attention to answering your questions regarding the C.A. program of recovery.

It is the collective experience of the members of Cocaine Anonymous that addiction is a problem not limited to cocaine or any other mind-altering substance. With this in mind, we suggest you answer the following questions:1. Have you ever used more cocaine, alcohol or other drugs than you planned? 2. Has the use of cocaine, alcohol or other drugs ever interfered with your job?

“At first it was fun. Then it reached the point where every time I used, I had chest pains and my heartbeat would go crazy; and yet I couldn’t stop.” “There I lay in the hospital, almost dead from an overdose. My heart felt like it was about to jump out of my chest and yet all I could think about was getting another hit.” “I couldn’t stop until my whole paycheck was gone. I promised myself that next week it would be different—

A Twelfth-Step call is one way for members of Cocaine Anonymous to be of service to others. We should not hesitate to go anywhere to be helpful, while keeping in mind the hopelessness and despair of active addiction. Provided we are spiritually fit, we can offer help to a still-suffering addict at any place and at any time. Since helping others is paramount to our program of recovery, please keep in mind these suggestions of what to do:

Welcome to Cocaine Anonymous. We are all here for the same reason—our inability to stop using cocaine and all other mind-altering substances. The first step towards solving any problem is admitting that there is a problem. THE PROBLEM The problem, as we see it, consists of an obsession of the mind and an allergy of  of the body. The obsession is a continued and irresistible thought of cocaine and the next high.

Having Fun in Recovery

“… we aren’t a glum lot. If newcomers could see no joy or fun in our existence, they wouldn’t want it. We absolutely insist on enjoying life.” One of the most surprising things a newcomer may hear at a C.A. meeting is the sound of laughter. How is it possible that the same people who probably started drinking or using drugs in the pursuit of a good time are now having an even better time without mind-altering substances?

It is the common experience for many of us to feel like we didn’t fit in anywhere. Drugs gave us that instantaneous feeling of belonging. When we get sober, that drug-induced feeling of belonging disappears. Finding a group of sober people we can relate to is a new start for us. We go to meetings as often as possible, preferably every day. Before long, we find we are most comfortable at one particular meeting.

A New High from H&I

Our primary purpose is to carry the message of recovery to the addict who still suffers. One way we do this is by holding meetings in hospitals and institutions for people who are not able to attend outside meetings. Institutions served may include, but not be limited to, correctional facilities, sanitariums, detox units, juvenile detention centers, half-way houses and shelters, either governmental or private. Confinement may be voluntary or involuntary.

Here are some tips to help you: Admit that you lack the power to stay clean on your own.  Make sobriety your #1 priority. Throw away all your drugs and drug paraphernalia. Don’t deal drugs. Go to meetings daily. Get phone numbers and use them. If your dealer calls, hang up and call someone on your phone list. If no one is home and you’re in trouble, call the C.A. helpline. Stay away from people, places and things with which you associate drug use.

Who is a Cocaine Addict? Some of us can answer without hesitation, “I am!” Others aren’t so sure. Cocaine Anonymous believes that no one can decide for another whether he or she is addicted. One thing is sure, though: every single one of us has denied being an addict. For months, for years, we who now freely admit that we are cocaine addicts thought that we could control cocaine when in fact it was controlling us.

Too Young to Recover?

There comes a time when the cocaine stops working—a time when the coke, the other drugs, and all the madness become unbearable. By then, you just can’t stop, so you manage to score and somehow survive. You keep on using because, although it’s killing you, cocaine has become the most important thing in your life. If you somehow, some way, get a break from it, get free for a moment with a little clarity, you will know this could be your last chance.

Unity is a common bond that transcends all differences. We’ve discovered no matter how different our circumstances or the paths that brought us here, we all suffer from the same disease: addiction. We admitted our lack of power and accepted that we could not recover alone. The strength and direction of our recovery is found in our unity. We are people who might never have mixed.

Cocaine Anonymous is a Fellowship of men and women who share their experience, strength and hope with each other that they may solve their common problem and help others recover from their addiction. The best way to reach someone is to speak to them on a common level. The members of C.A. are all recovering addicts who maintain their individual sobriety by working with others.

Yes, You Can Start a C.A. Meeting

“Life will take on new meaning. To watch people recover, to see them help others, to watch loneliness vanish, to see a fellowship grow up about you, to have a host of friends—this is an experience you must not miss. We know you will not want to miss it. Frequent contact with newcomers and with each other is the bright spot of our lives.”*

Reaching Out to the Deaf

In the ancient world, when children were discovered to be deaf, they were often disowned and left to die or fend for themselves.Currently, six to ten percent of the United States’ general population are deaf or hard of hearing. Of that number, ten percent are addicts and/or alcoholics (approximately 2 million). 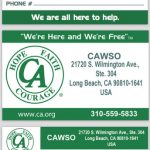